Turning to the inventory lists for Portsmouth and Berwick from the early 1630s, several items stick out. In 1632 yards of cloth were purchased and turned into clothing, including:

7 dozen pairs of hose (thus these were cloth hose, not knitted)

And the 1635 inventory of both Portsmouth and Berwick reveals:

So, what does this tell us?

Here are some examples of these garments and more thoughts along the way. 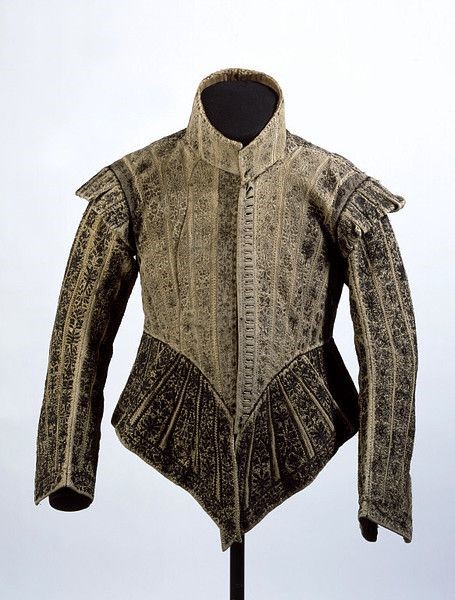 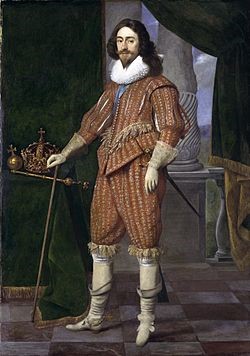 Or relatively straight across the waist

Commonly the doublet was attached to the breeches to keep the former from riding up and the latter from falling down. This could be done with ties or hooks and eyes. 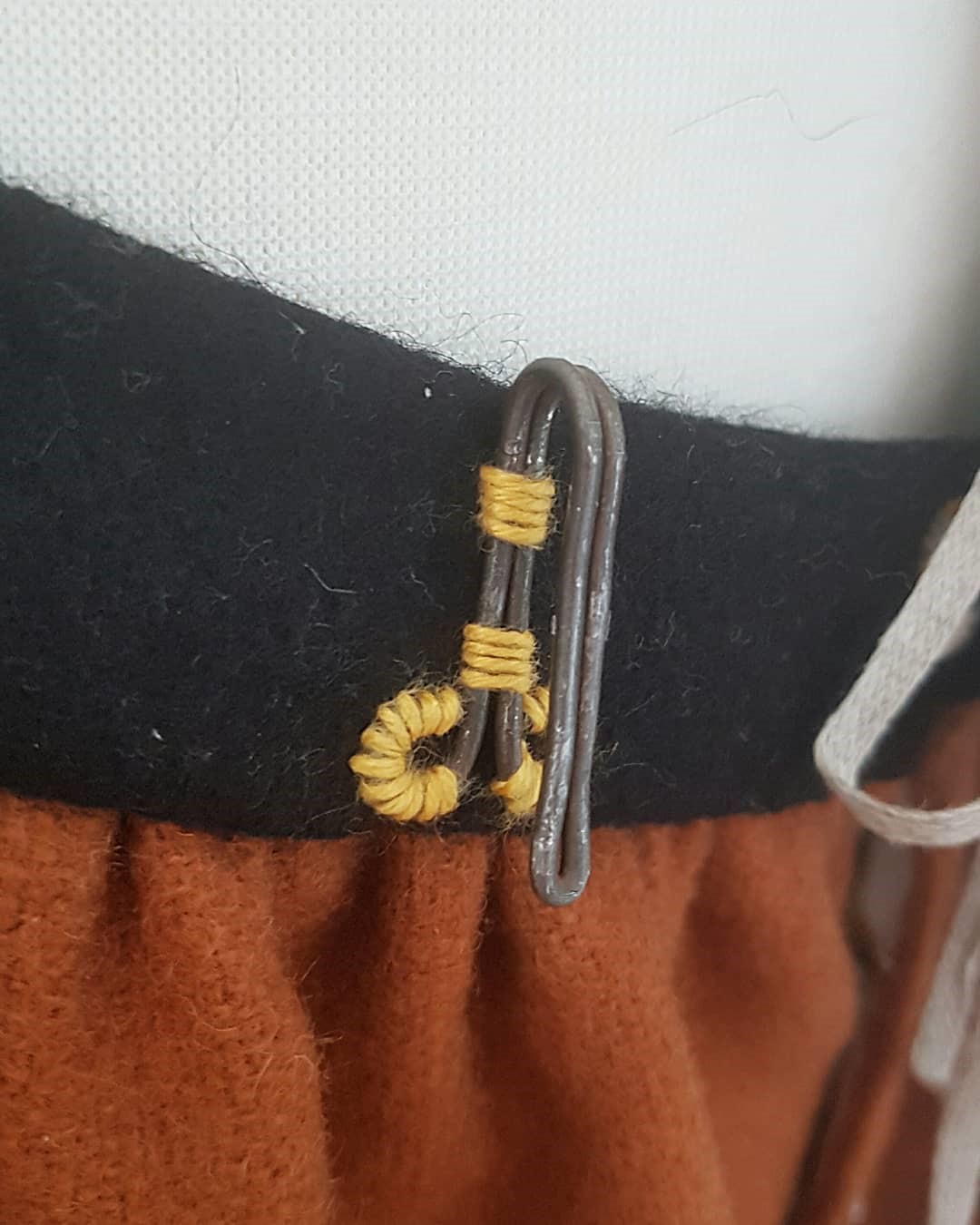 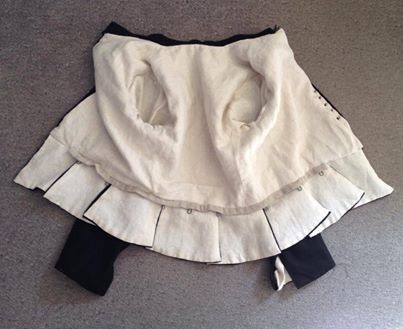 Here are some looks and outfits, both original and reproduction 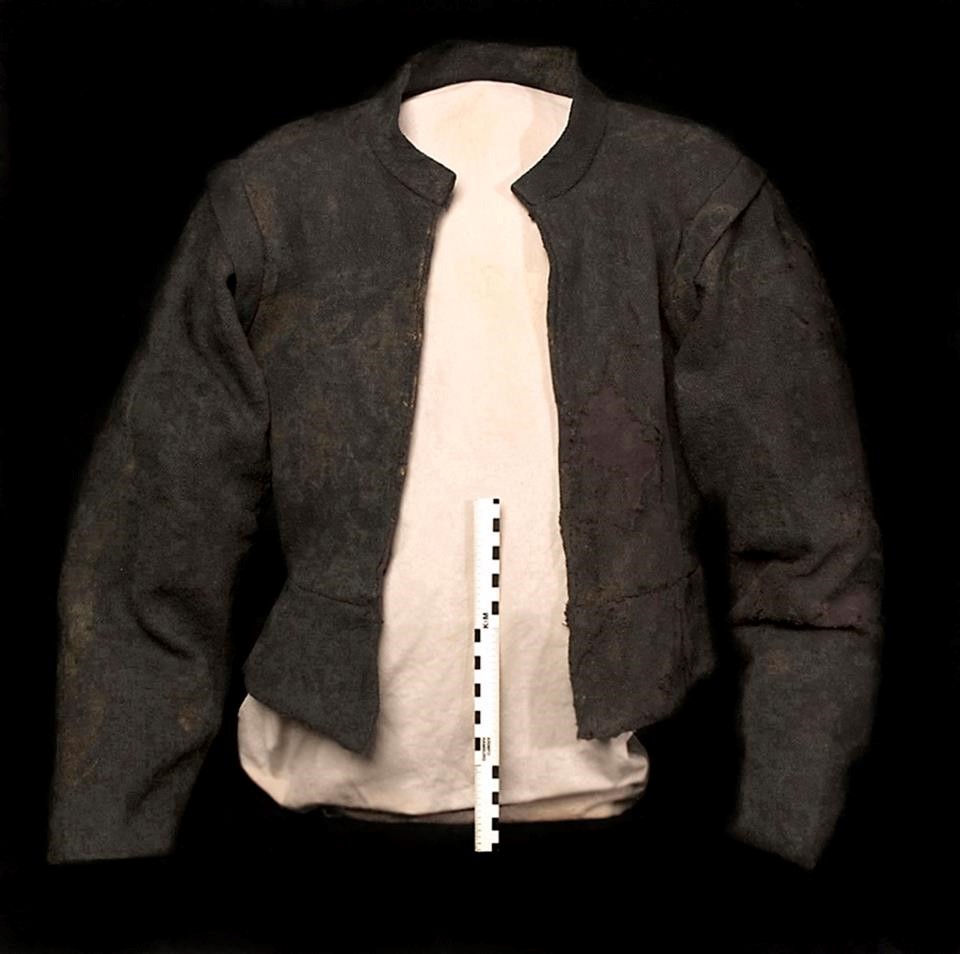 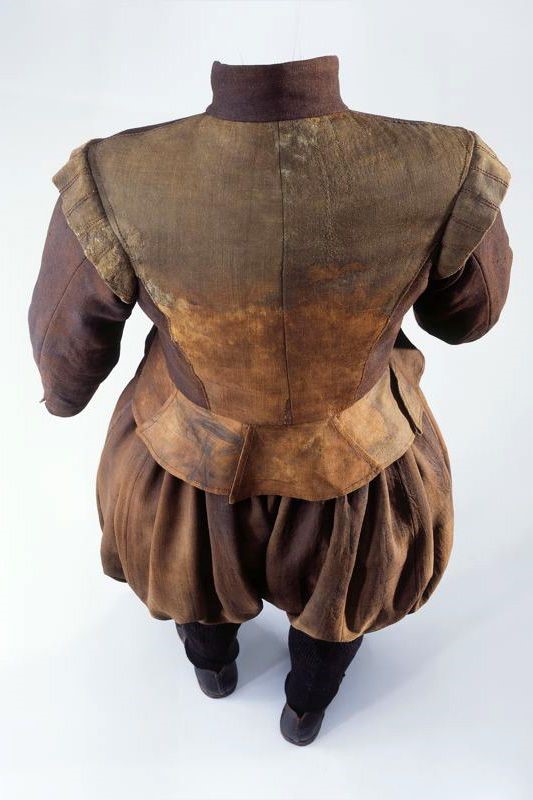 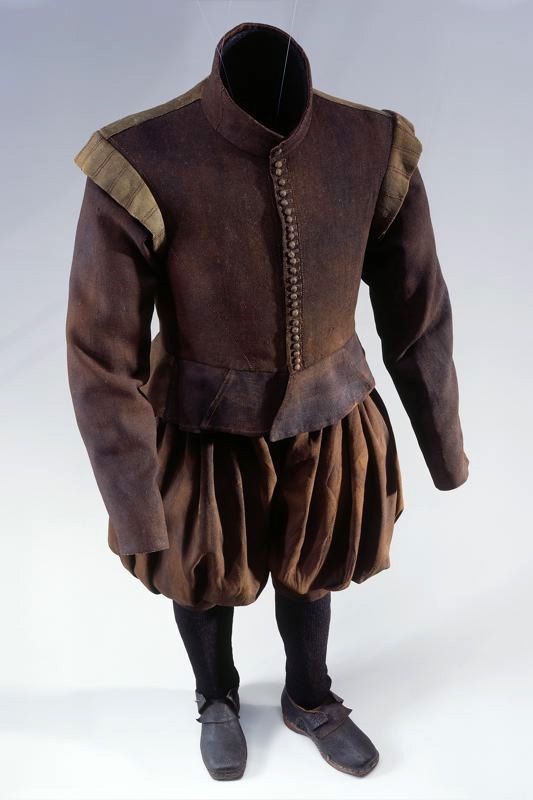 Note breeches are lined. Apparently, this was common. 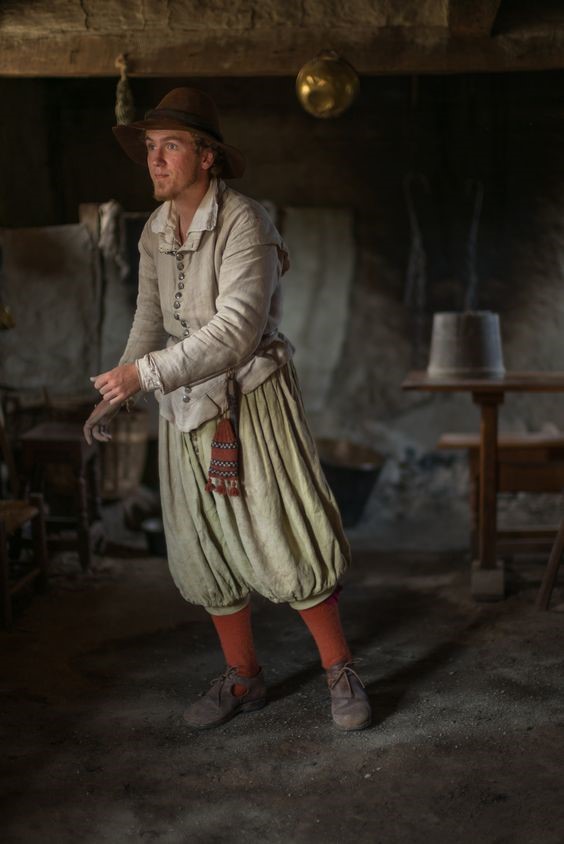 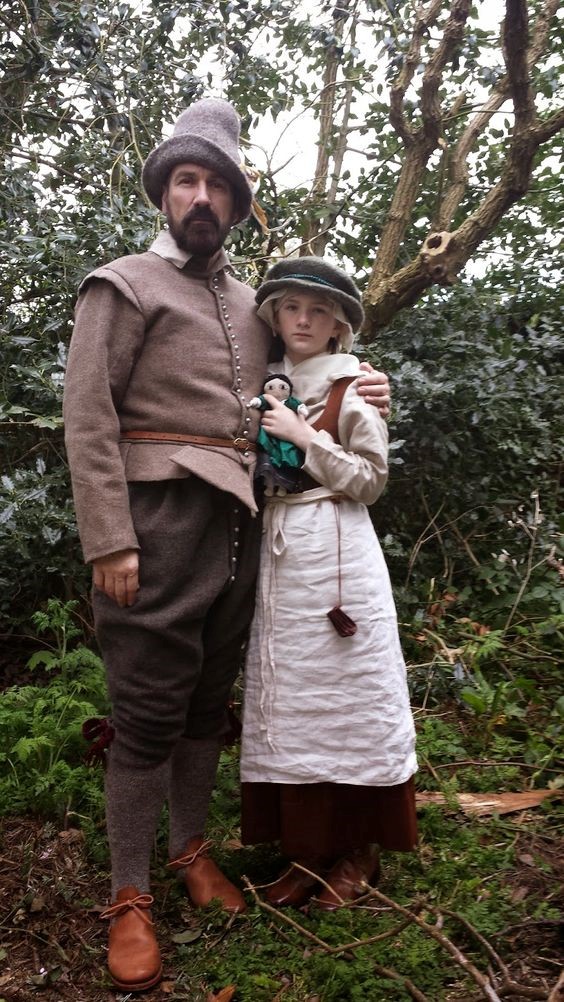 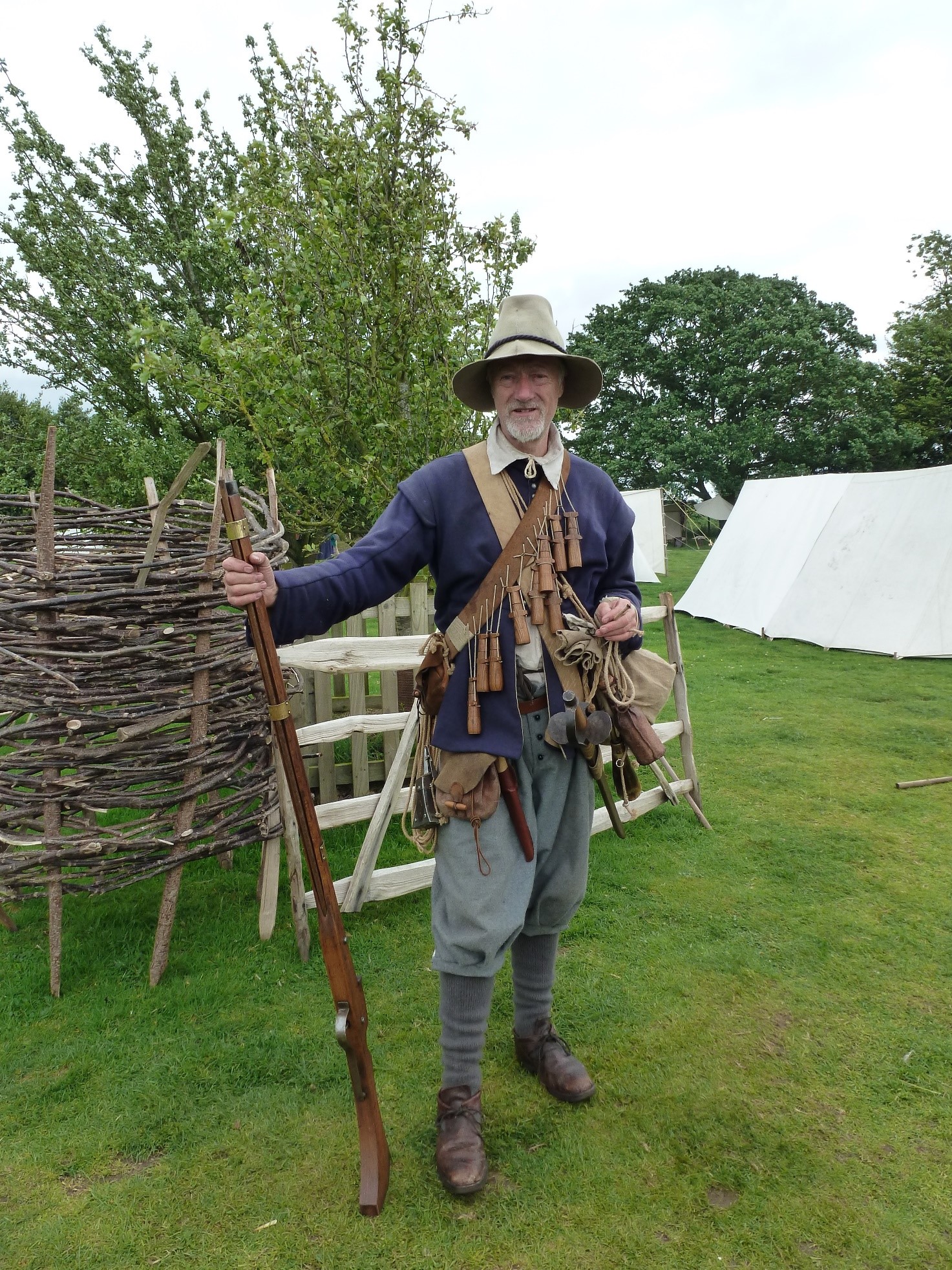 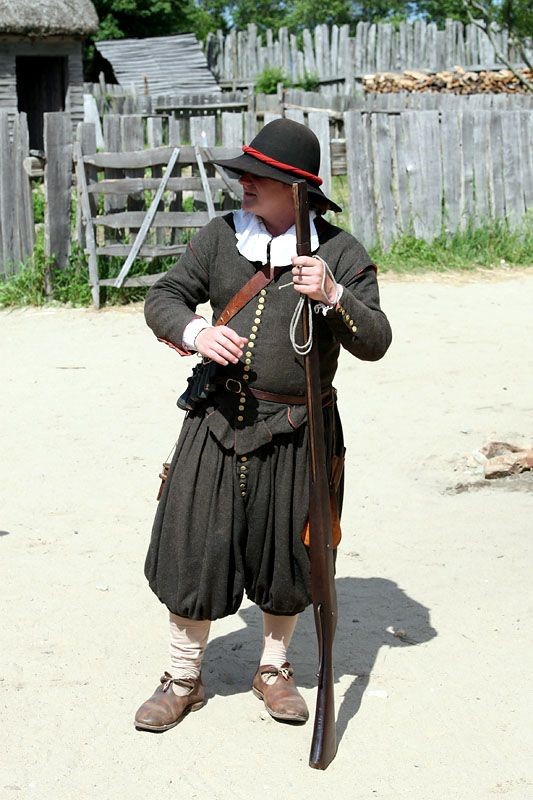 Not everyone wore a doublet. Here is a sailor’s outfit with an over work shirt 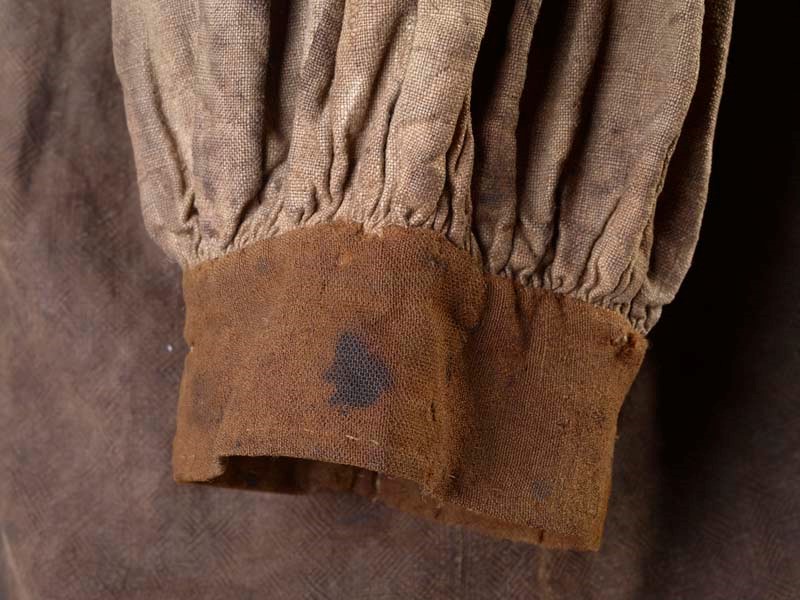 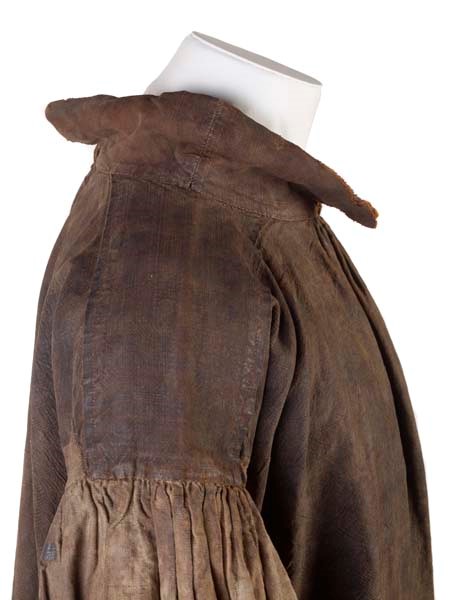 Great Interpretation of a Soldier 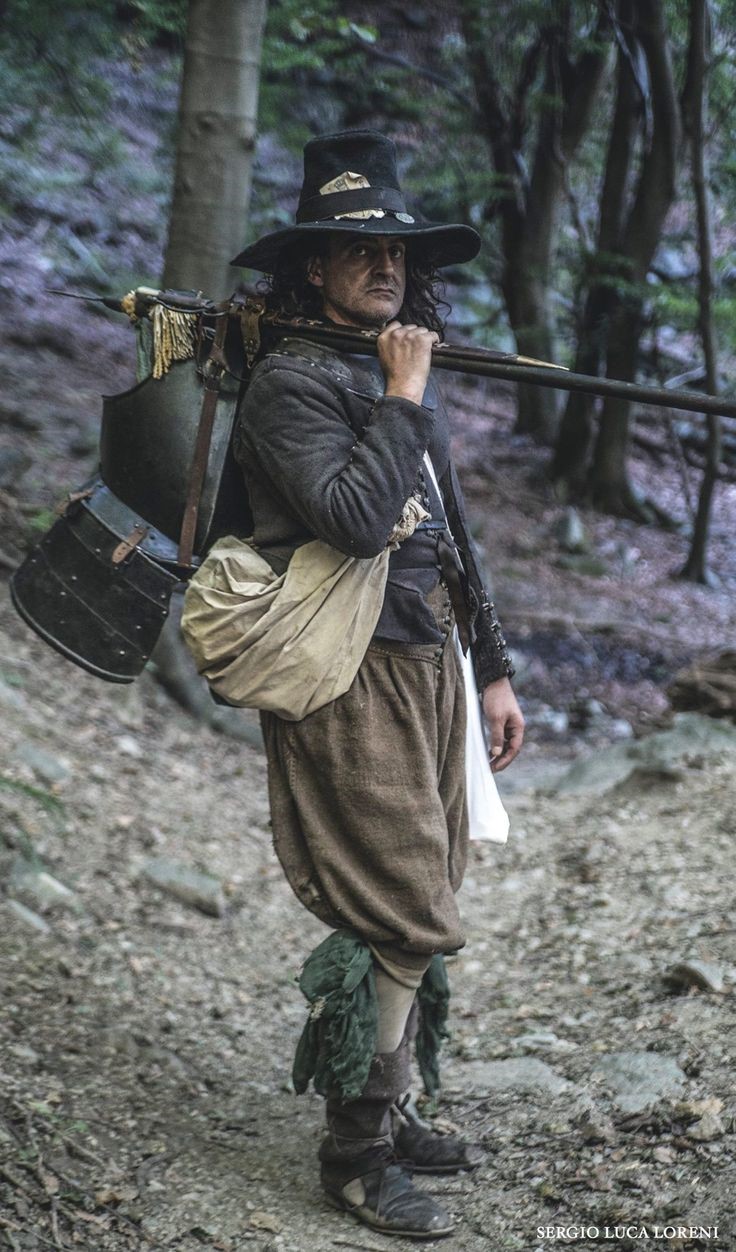 The cassock was an overcoat, often with slit sleeves so the arm could push through. The slit could be left open or buttoned close. A cassock could also be a cape that fit all around the body but with buttoned slits in the front. 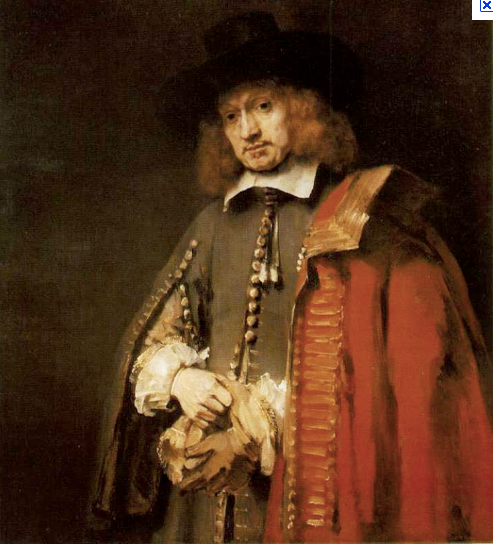 So, shirts are interesting. They had either a wide collar or a short collar and a separate Falling Band was worn that projected out over the shoulders. These were a separate piece that were worn almost like a dicky or false turtleneck. Some were tacked to the shirt collar. It not only provided some elegance but may have saved wear and tear on the shirt collar. The Falling Band was easier to replace. Now how often these were worn by colonists involved in hard work every day is hard to know. One interesting point is that shirts and Falling Bands were usually closed with ties not buttons.

However, if you have a white shirt, I’m sure that is fine. If you want to make and tack a larger collar to it that is up to you. The basic construction of the rest of the shirt did not change throughout the 17th and 18th century. Still nothing but a bunch of rectangles.

This shirt would probably have a Falling Band 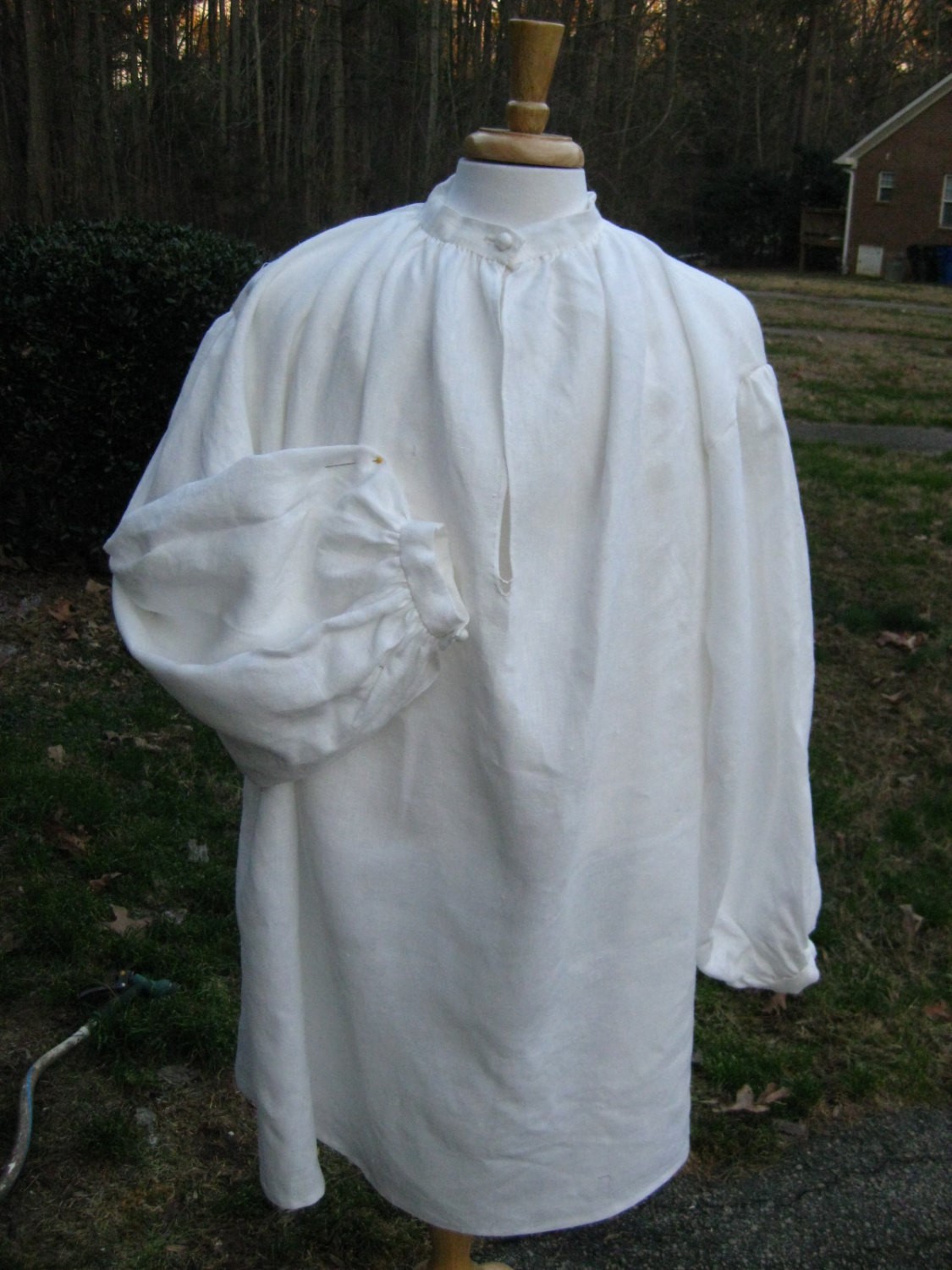 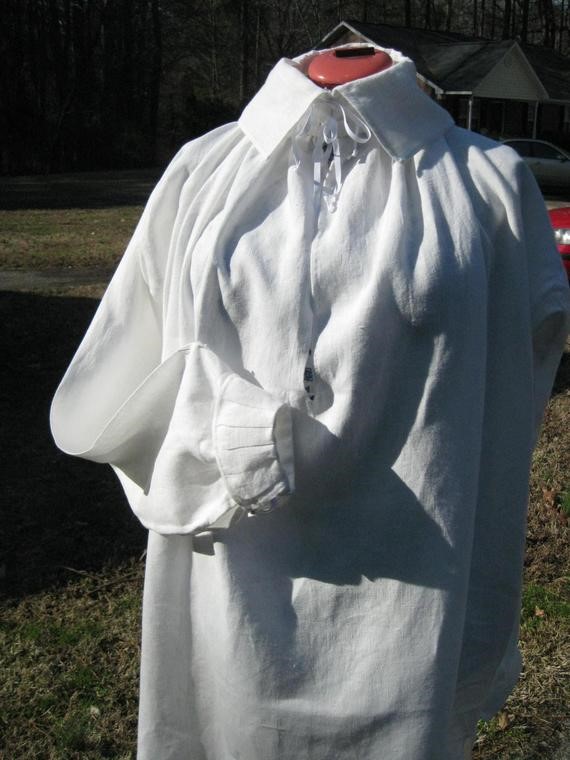 Shirts with large collar and ties at the neck. 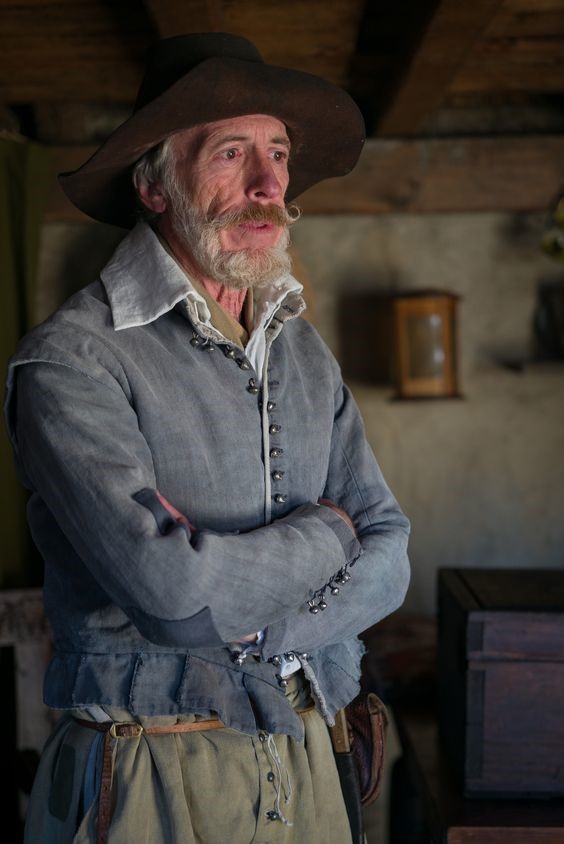 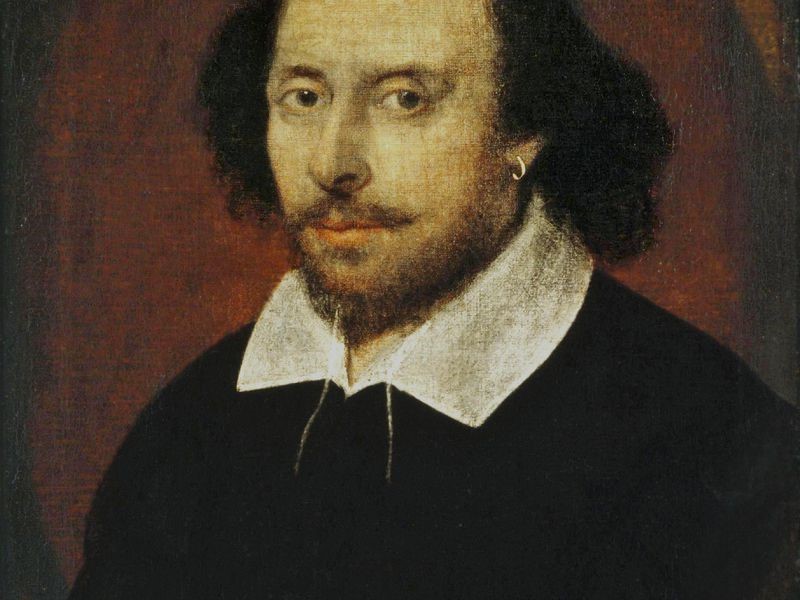 How to make one: http://www.renaissancetailor.com/demos_cavcollars.htm 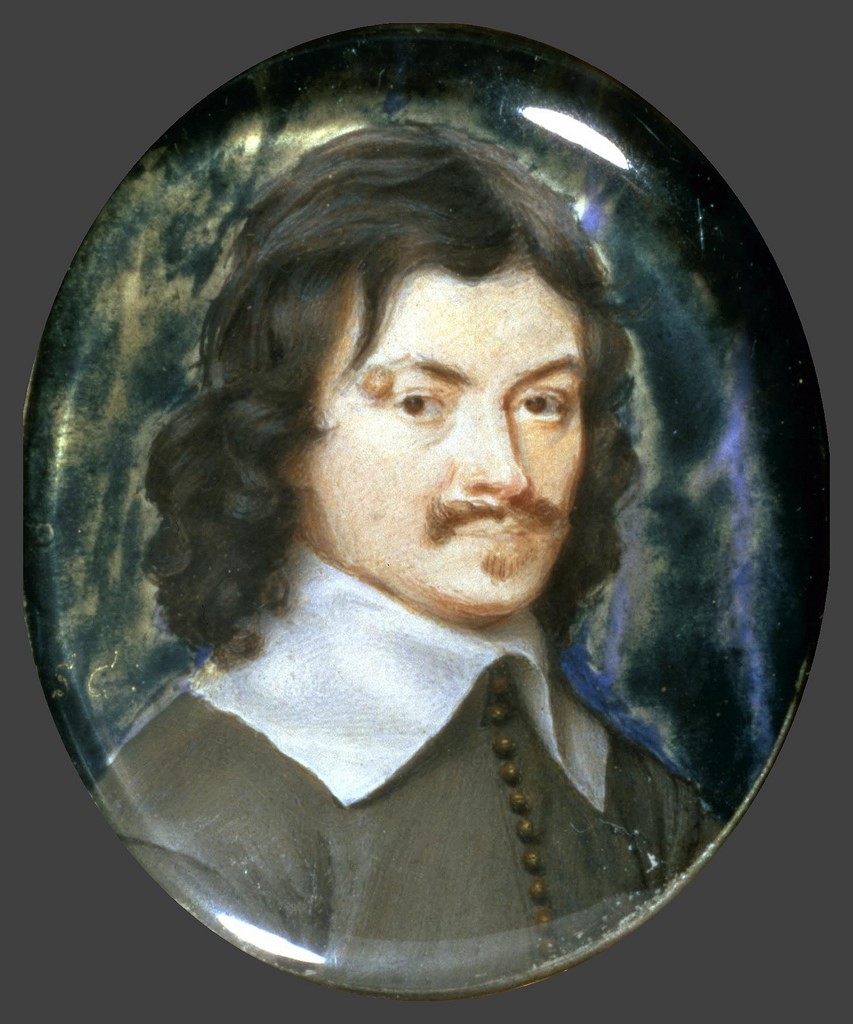 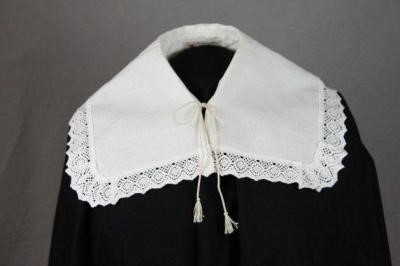 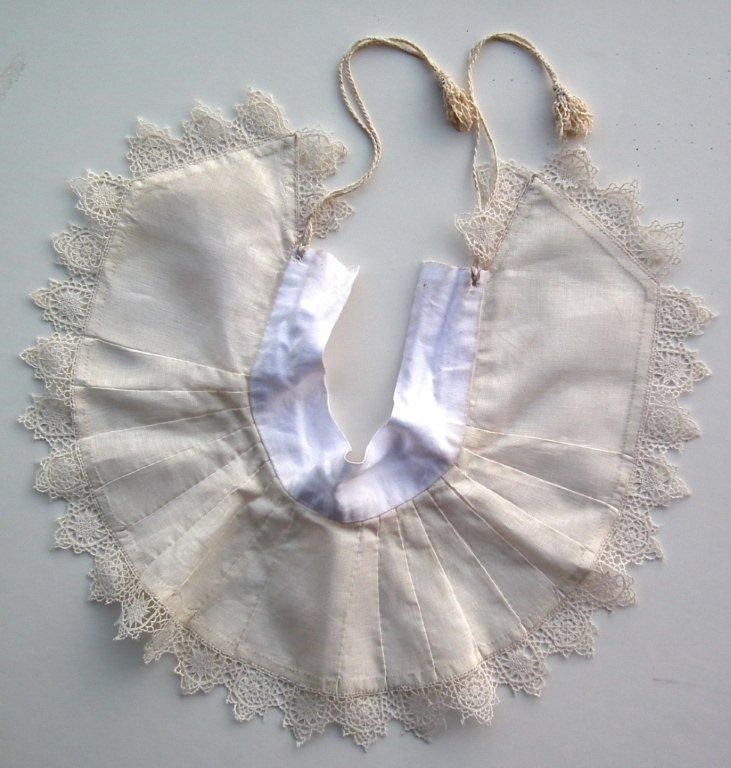 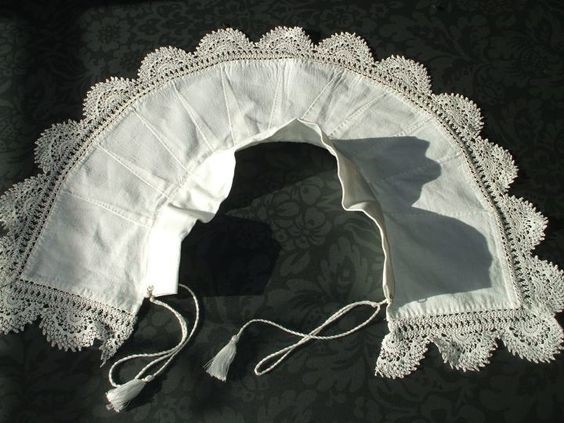 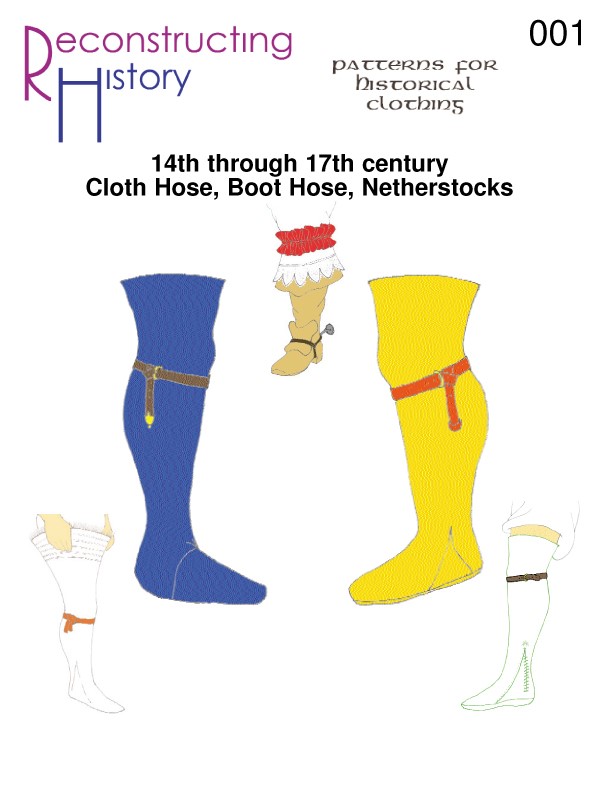 As indicated, socks could be knitted wool or sewn cloth. The former was sewn from cloth, the latter I don’t know. In one of the inventories they mentioned linen stockings and leather stockings (?). As most of us have knitted wool socks, that is fine, but Reconstructing History does have a pattern for sewn stockings.

One thing about shoes is that in this period only the upper class had a heel. Apparently, the raised heel did not become common until the 1640s. However, most reproduction shoes come with heels. I would be a heel to say we cannot have heels; I’m certainly shoes with heels. They did have tall shoes similar to what we call Half Boots or Hi-Lo shoes, although the reenactor term for this earlier version is Startup Boots. Some claim that the difference between the periods is that the early 17th century startup boots did not have a tongue.

Frankly, we are being somewhat liberal with shoes because people do multiple time periods and shoes are so expensive. Just keep this in mind, a low quarter tie shoe will work, but not a buckle shoe. They didn’t have buckles like the 18th century.

The taller heel tended toward the end of the 17th century. The center one is appropriate. 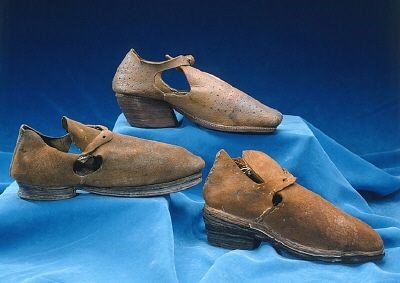 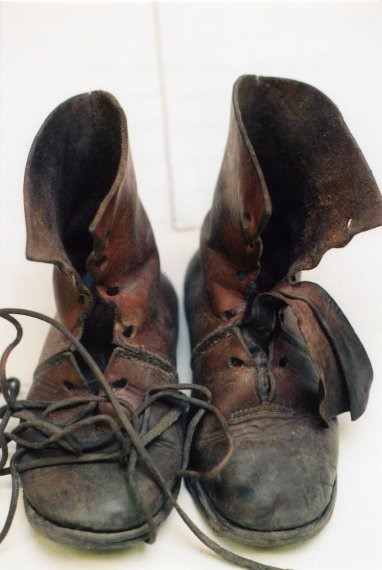 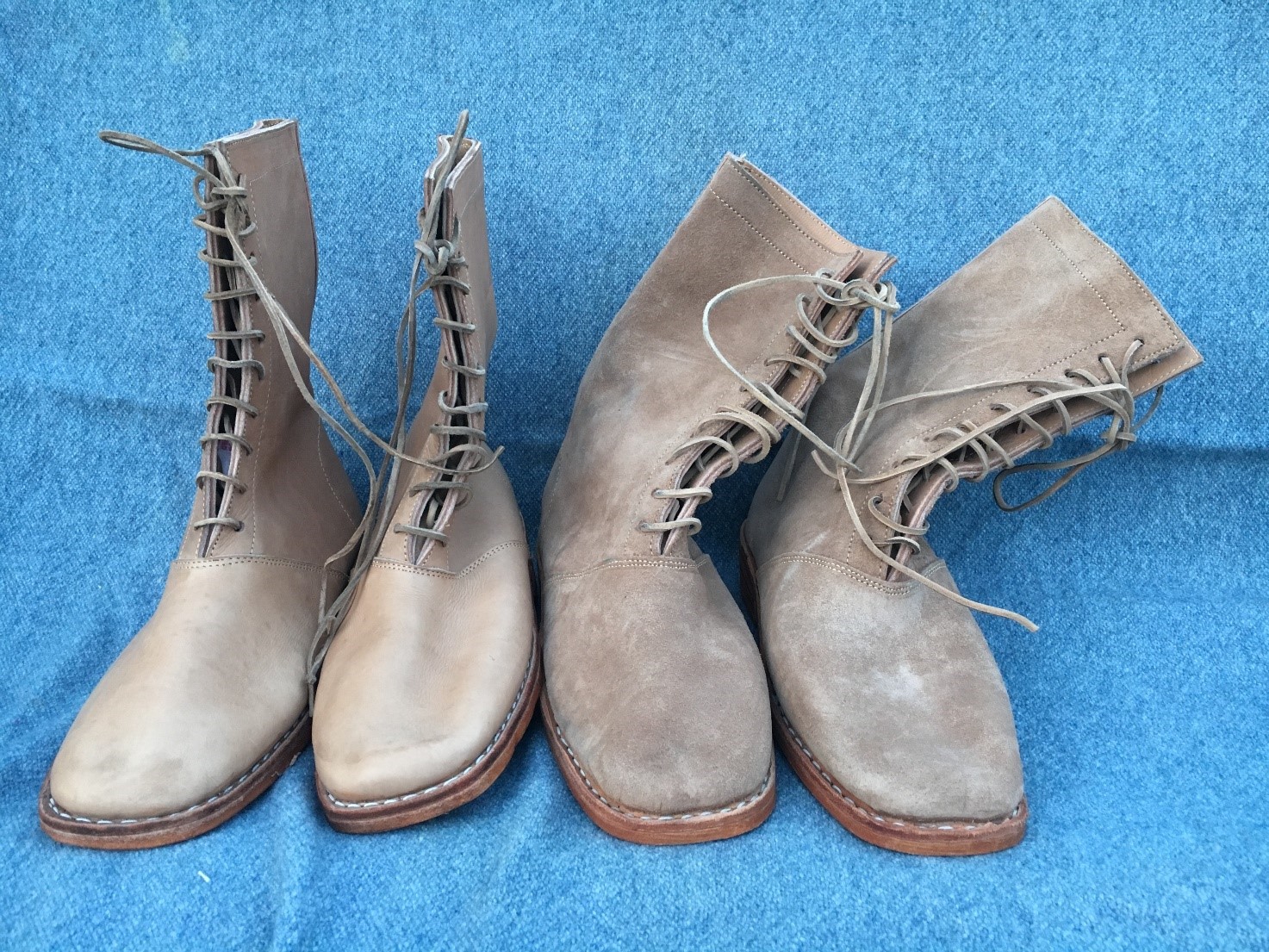 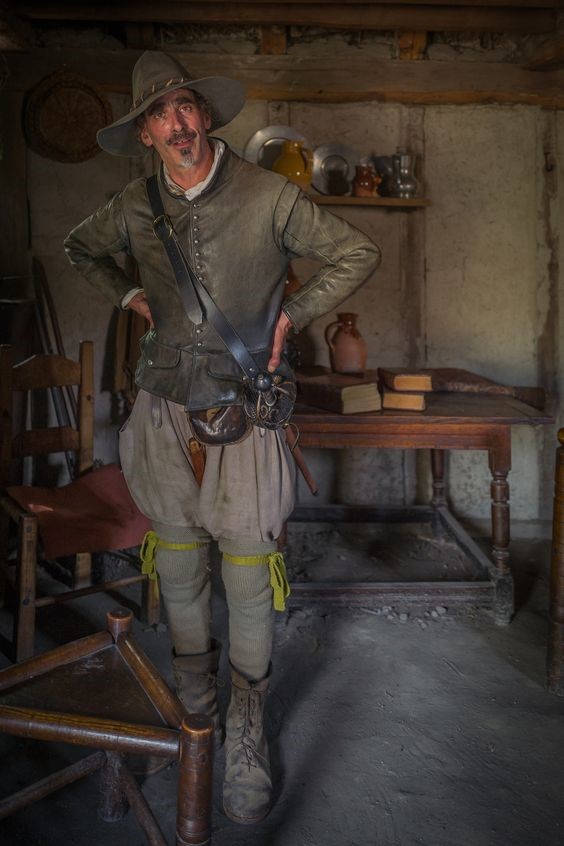