Benjamin Church was one of the first Englishman to learn and adopt the native way of war.  During King Philip’s War he used mixed companies of natives and whites, and told his white soldiers to observe the Indians and learn their ways.  Church would continue to be the most effective New England officer in leading long-range scouts and raids during King William’s War and early in Queen Anne’s War.

Church’s exploits during King Philip’s War are well known.  He led a charge and was wounded at the Great Swamp Fight.  He also argued in vain to preserve the village from burning, as the English force needed shelter and food.  The village was burned anyway, and the army suffered so much it had to terminate the campaign.  Church then received orders to form a mixed company of Indians and whites, and led it successfully against Philip’s people and the Narragansetts.  It was one of Church’s Indians that killed King Philip.

In King William’s War Church led four raids along the Maine coast.  In 1689 his force arrived at present day Portland just as the town was under attack.  Church landed his men and participated in the Battle of Brackett’s Woods.  In 1690 he raided up the Androscoggin River, attacked an Indian fort and took some prominent women captive, which would lead to a temporary truce.  On the way back he stopped at Casco Bay.  His Indians were attacked as they slept on shore, but Church landed his white soldiers and drove the enemy off.  In 1692 he accompanied Gov. Sir William Phips to Pemaquid, Maine where construction began on Fort William Henry.  Phips sent Church on a raid along the Maine coast, where he sailed around Penobscot Bay and up the Kennebec as far as an Indian village at the site of present day Waterville (this was just as well because Church was not impressed with the fort building).  In 1696 Church sailed to the Bay of Fundy where he attacked and burned some French settlements.

In Queen Anne’s War Church, now in his sixties, conducted his last raid.  He sailed once again along the Maine coast and into the Bay of Fundy where he attacked the village of Grand Pré.  Church then wanted to attack the Indian village of Norridgewock, but he was superseded in command and the expedition accomplished very little.  In all these raids Church relied on whaleboats to transport his men.  Samuel Penhallow in his 1726 history of Queen Anne’s War wrote that Church’s men “rest in the Day, and row in the night; and never fire at an Indian if they can reach him with a Hatchet.”

Benjamin Church died in 1717 and is buried in Little Compton, RI.

In 1992, the US Army Rangers, who had previously acknowledged Robert Rogers as the “First Ranger,” finally understood that Benjamin Church deserves that recognition. They inducted him into US Ranger Hall of Fame and placed a Ranger emblem on his grave. 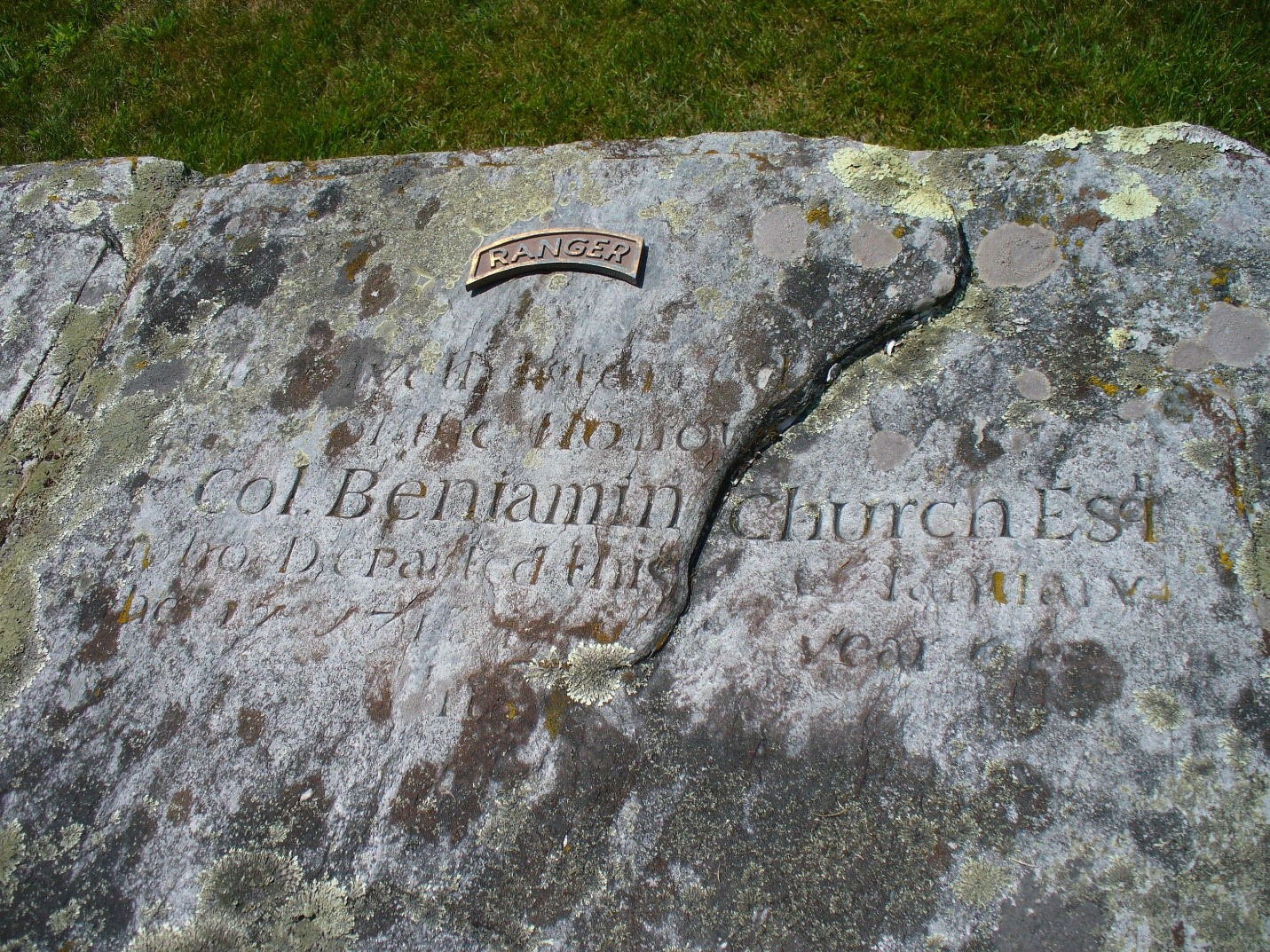